I’ve just been reading a blog post about the death of Gillian Mears. I’ve read some of her writing over the years, since the early novel “The Mint Lawn” to the recent novel “Foal’s Bread”. There are many of her works I am yet to read, and I am saddened to learn there will be no more books coming from her pen/keyboard …

I’m sure I’m not the only person with MS who almost lays claim to another person, simply because we share a disease, and a life interest. But there you have it, both Gillian Mears and I have/have had MS, and we are both writers. Gillian Mears‘ writing has been published with traditional book publishers, mine has been mostly self-published. Gillian died at the age of 51 after many health problems. I am still alive at the age of 53, and living a relatively healthy life, albeit a life slowed a little by having multiple sclerosis.

Is there a point to this blog post? No, not really, except that I thought I should pay tribute to an Australian writer who has done much good work, and earned many accolades, and has now left the world in a bodily sense, but who lives on through her written words, and people’s memories of her. This is how I wish to live on, after I eventually die.

Not that I thing my mortal end is coming soon, I feel I still have many more years left in me. I am able to walk, even run, if I really really have to. I may get a little tired in the evening sometimes after a big, or stressful day, but overall, I’m feeling pretty good. And the fact that I’m not as well known through my writing as Gillian Mears was, is just one of those things.

I never tried as hard as Gillian did, and I’m quite likely nowhere near as good a writer as she was. We all have our own place in life, and I’m more than happy with the place I’m currently in, as a writer/poet with some books published, and doing writing related things that are within my capabilities, and that other people have found inspiring.

I’ve written on children’s reader that still earns me money many years after it was published, and I have three other books self-published that still sell the occasional copy through the Poetic Justice Cafe Gallery in Gawler where I am the Writer-in-Residence, present three times a week. I hold a poetry workshop there on every Sunday in the morning, and have a fine time enthusing others in the idea and reality of being a poet.

Is that enough for one life? I think so, more of the same sounds like a good way to go. Living in a way that suits me and my abilities, and that other people find inspiring? Wonderful!

I will always remember my neurologist telling me, at the appointment when he told me I had MS, to make sure I exercise. He actually told me to walk for half an hour three times a week, or something like that. It may have been every day, but I don’t think so. My memory is one of the victims of my MS, or it may just be age and menopause, whatever the cause, my memory is somewhat unreliable at times. I definitely remember he said “Use it or Lose it!”

Anyway, at the time of my Neuro telling me this, I DO remember thinking it wouldn’t even be possible to walk for half an hour, and at the time it wouldn’t have been. Once I was able to though, I got back into the Wii Fit exercises that I’d begun doing years ago when we first got the game. I slowly began working my way up toward my own records, and was pleased when I could beat my own pre-MS records! Yay Me! I still get a kick out of being able to set a new personal best score, and it’s even better if I break a top score made by my husband or our son! Neither of them do the Wii Fit now, they go off to gym in our local town instead, but I prefer to exercise at home.

Managing walking for half an hour is probably possible for me now, if the weather isn’t too hot, and if I’m feeling good. But just walking doesn’t really interest me, or maybe I’m shy about it because there’s always the possibility I’ll fall over, and I’m sick of falling over, especially in public, of the embarrassment! 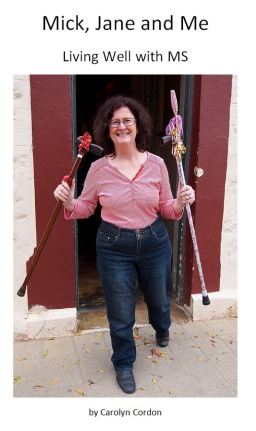 I’ve had help from my walking stick and my walking cane in the past, but now I only get them out as props if I’m talking about my book I wrote about my new MS life.

Of course, if I do fall over in public, it gives people the chance to do something good for another person, (help me get up again) and that’s always a good thing to hear about. I’d just rather I was the one doing a good thing for others though, something that, unlike me falling over, doesn’t involve embarrassment and bruises! Because that’s what life can be at times for me, in my MS life, embarrassment and bruises.

This morning was definitely not embarrassment and bruises though. This morning I switched on our faithful Wii Fit exercise machine to find out how my weight loss efforts were going, and to do the half hour of Wii Fit exercises I’m trying to get done at least three times a week. This is a way to keep active and mobile that suits me so much more than being outside in the public. I love being able to do the Wii Fit without have to dress up much. Just track-pants and a daggy t-shirt, that’s all I need.

So I switched on the machine (I really must give this friend a name). My weight today was lower than the last time I checked in, and getting close to the current target weight I’m aiming at, on my way to my Ultimate Target Weight. I have until halfway through next week, I think, to drop those pesky few hundred more grams, and as long as I bear that in mind, it should work … I am off to my favourite cafe tomorrow and Monday though, so who knows …

OK, so today went well for me and Wiindy (that’s what I just decided I’m going to call the Wii Fit exercise machine). I certainly did the required thirty minutes, and didn’t take the easy way out at all really. I used up 77 calories, which is a goodly number. I’m proud of myself for managing it, and I certainly felt like it had been a hard work out by the time it was over! That is a good thing, for sure, and sitting down for a while after was a welcome choice.

So what did I do with Wiindy? Well first up was the torso twist exercise I can’t remember the name of. Then I went for a run, holding on the the wiimote as I ran, then I did hula hoop (twice), after that I did ten minutes of Free Step. I was feeling it a bit by then, so I went a little easier.

I didn’t do super easy exercises though, as I have had to do sometimes. I did one of the balance games where we have to manoeuvre the ball things down the holes, and after that I did the soccer game where you lean towards the soccer ball to hit it back. There may have been one or two other exercises there, but can’t remember what. If I want to know though, Wiindy can tell me, because she has a machine’s memory, not a frail human’s memory!

I’ve also been doing my hand weight exercises almost every day since my birthday in early April. Doing at least five or so minutes of lifting, using my 1kg and 2kg weights (I have two of each). The weights in the picture are my lighter ones, which I tend not to use, they only weigh 500 grams, I’ve moved beyond them mostly, although If I look into it I could probably find an exercise that they would be good for. All of my weights are right next to our computer, and having them there handy, means I have no excuses for not using them!  I enjoy doing these, and feel powerful and able to bust arse when I’m lifting. This is a good thing for people who sometimes can feel frail!